In the business world, the rear-view mirror is always clearer than the windshield.

Granted that the bulk of the losses reported by Berkshire are mark to market losses which is system-wide and holds true for everybody - what was the reason for the markets to punish Berkshire stock by 13% vis-à-vis the SP500 in the span of just one month? The only explanation is that the markets were not very comfortable with Berkshire’s investment holdings anymore, in light of the impact of the Corona pandemic on the world economy. Buffett himself pre-empted this move by selling all airline stocks in his portfolio, including American Airlines, Delta Airlines, Southwest Airlines and United Continental. Berkshire owned approximately 10% of each of these airlines and no doubt the unloading of such a big quantity of shares in the stock market would have been possible only at rock bottom prices. Suffice it to assume that Berkshire would have taken a significant hit in this share sale. More importantly though, in selling all airline stocks together, Buffett debunked his own ‘Buy and Hold for life’ philosophy once and for all. We at Attainix Consulting have been saying consistently that the ‘Buy and Hold’ approach does not make sense in the Knowledge economy anymore, since new upstart businesses can disrupt existing established business very quickly. But now that the master himself has reneged on his own words, I guess his actions will speak louder than his words to the millions of his ardent followers worldwide! 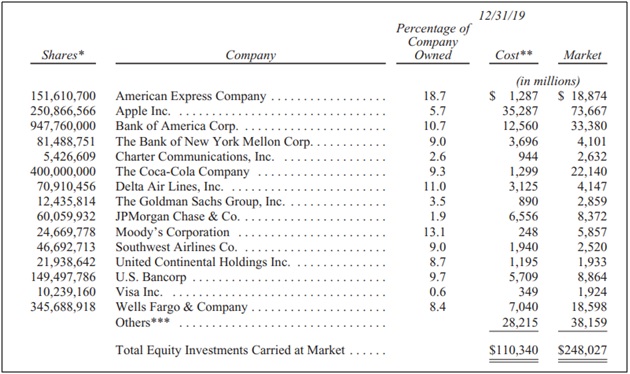 Well I noticed 3 stocks in Airlines, 6 stocks in Banks/Investment Banking, 2 stocks in Card services, 2 stocks in Technology and 1 stock each in Credit Ratings and Beverages. If ever a case was to be made for putting too many eggs in the same basket, then the above portfolio would win hands down! Of the top 15 holdings, 3 are in Airlines and 9 are in Financial Services – of which 4 are Banks. Buffett sold all his Airlines stocks because he believes people will not fly so much anymore after the pandemic – also the fact that video communication has woven itself in every one’s lives. But what about Banks – will their non performing assets not swell as a result of the pandemic? Sure they will, and that is exactly why the stock markets have been punishing the Berkshire stock. The problem for Buffett is that his Bank holdings are so large that he cannot hope to sell them like he sold the airlines, without disturbing the entire market and shooting his own foot!

So there you have it – the world’s greatest investor has been found to hold multiple stocks in the same sector in his top 15 holdings – a mistake which even a novice portfolio manager would not make. But such is the aura of mega investors that when the going is good such mistakes are overlooked as genius moves. No wonder then, this situation reminds me of one of Buffet’s own quotes – “Only when the tide goes out do you discover who's been swimming naked”.

Having said all of the above, I should remind you though that Warren Buffett is still sitting on $137bn of cash. This is like an elephant gun which he can use to correct his own mistakes over time. But can you? Do you have tons of cash that you can deploy to correct blunders in your own portfolio that have been exposed by some unforeseen event? If not, get help. Hire an expert to advise you on your portfolio, if nothing else to detect and avoid common blunders well in time.

Posted by Attainix Consulting at 1:06 PM